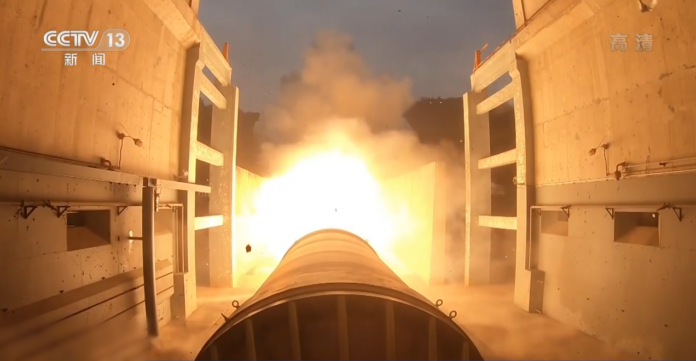 On Tuesday October 19, China tested a 3.5m-diameter 500-ton thrust solid-fueled rocket engine in city of Xi’an. The engine was developed by CASC’s 4th Academy, also known as the Academy of Aerospace Solid Propulsion Technology (航天动力技术研究院). The test run lasted a total of 115 seconds and took place in the Academy’s Bailuyuan (白鹿原) test facilities.

The test represents a significant milestone for China in the development of solid rocket engines for civil space use. China has traditionally used liquid-fueled rocket engines for its launch vehicles (UDMH/N2O4 for older generation Long March 2-4 rockets, kerolox and hydrolox engines for Long March 5-8), the only exception so far being the light-lift solid-fueled Long March 11, which can be land or sea-launched. More recently, commercial space companies such as Expace, iSpace or CAS Space have also adopted this technology for small rockets, presumably sourcing and repurposing solid-fueled engines initially for military applications (solid propulsion being a highly regulated product in China). Worth noting, solid propulsion is also used in China for certain specific applications such as in the engines of the Long March 2F escape tower.

The latest test highlights an unprecedented improvement of China’s capabilities in solid propulsion. A CCTV report on October 19 pointed out that the engine represented the most powerful solid-fueled booster worldwide, which is not entirely correct from a historical standpoint: the AJ-260-2 built by Aerojet in the 1960s had a diameter of 6.6m and a thrust of ~1800 tons (thanks to Techniques Spatiales for pointing this out). The engine casing is composed of novel carbon-fiber composite materials, enabling a significant reduction in weight according to 4th Academy propulsion engineer Bai Yanjun.

This test can be seen as a result of China’s decade-long effort in developing solid-fueled rockets alongside its more notorious liquid-fueled rockets. Solid fueled rockets have the advantage of being able to produce a high amount of thrust, presenting less complexity, and requiring less launch preparation.

While last week’s test represents a new milestone at 500t of thrust, AASPT also plans to design a 5-segment 1000-ton thrust solid rocket engine, according to academy director Ren Quanbin in an interview to CCTV.

Where will these engines be used, considering that the new-gen Long March 5-8 rockets all use liquid-fueled rockets?

While none of China’s new-generation rockets use solid-fueled engines (with the exception of the Long March 11), several future launch vehicles should make use of this technology. The Long March 6A, a new rocket showcased at the Zhuhai Airshow and that should perform its maiden flight in the coming months, consists of a core stage using liquid propulsion, complemented with 4 120-ton thrust solid-fueled strap-on boosters. Manufactured by the Shanghai Academy of Spaceflight Technology (SAST), this model represents the first solid/liquid propulsion combo in Chinese launch vehicles. Two other rockets, the Jielong-3 and Jielong-3A, manufactured by a spin-off of the Chinese Academy of Launch Technology named “China Rocket”, plan to use the 2.6m/200-ton thrust and 3.5m/500t thrust engines respectively, according to a company WeChat post from October 19. Finally, it is reported that the aforementioned engines, and notably the future 1000-ton thrust version, could be used for space exploration missions.