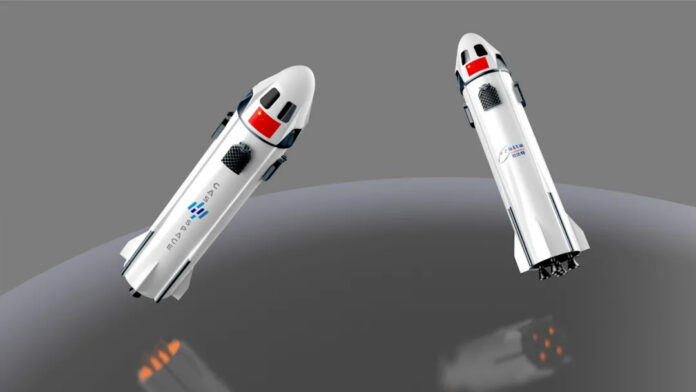 Space is a realm that can be exploited for many different, and sometimes contradicting, purposes – from satellite communication, to climate change monitoring, including space tourism. This summer, we have seen two US space companies sending tourists in Low Earth Orbit aboard suborbital spacecraft: Blue Origin’s New Shepard, and Virgin Galactic’s VSS Unity spaceship. Recent space news seem to indicate that China is also interested in space tourism and currently seeking to develop a Chinese New Shepard.

CAS Space, the commercial launch company backed by the Chinese Academy of Sciences and with support from the Guangzhou Government, announced in August 2021 an agreement with Zhuhai Orbita to develop a rocket that looks conceptually very similar to the New Shepard, and that will be used for space tourism. This is a significant step forward, considering that there was a lack of tangible space tourism projects in China – although some companies like Landspace, iSpace or Space Transportation did mention it in the past.

First, the booster rocket. Unsurprisingly for a suborbital launch, the rocket adopts a single-stage architecture, with a stage diameter of 3.35m, and powered by 5 sets of 15t thrust liquid-fueled kerolox engines called “Xuanyuan”, which is still under development at the very moment by another fellow CAS commercial spinoff XAPT (short for Xi’an Aerospace Propulsion Technology). The Xuanyuan engine was designed from the start for reusability, with the ability to throttle and restart the engine multiple times. This enables the first stage to be recovered, in a similar way to New Shepard. Together, the 5 engines provide a liftoff thrust of 75t, lifting the rocket’s liftoff weight of 70t. Next, the top of the rocket hosts a capsule, also with a diameter of 3.35m, a height of 3m, and 4 panoramic windows. The cabin is designed for 7 passengers, making it more or less the equivalent of the New Shepard in terms of crew, which is designed for 6.

In terms of timeline, CAS Space plans for a first demonstration flight in 2022, followed by full-fledged unmanned suborbital flight in 2023, and the start of suborbital tourism in 2024. The company estimates that 1,000 passengers can be transported into space each year. And fun fact, the landing site for the rocket will be constructed within an aerospace theme park, space experience hall, and aerospace science education base. The passengers will receive a short training before taking a 10-minute flight that traverses the Karman Line, providing passengers with 3 minutes of “zero gravity” and enabling them to be called astronauts.

Overall, an Interesting, although early-stage development in China of suborbital crewed spaceflight. Yet ultimately, even if 1,000 customers per year can go into orbit, suborbital tourism is still a truly ostentatious display of wealth, and one that I would have expected would not be particularly well-received in China at this particular time.