A Review of the Chinese Space Station 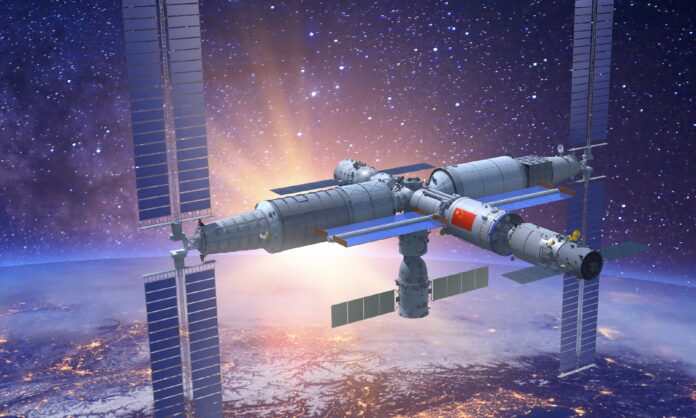 If China’s plans to build a space station date back to the 1990s, it has only recently gained international attention. Indeed, China’s technological ability to effectively build and send an operational space station has impressed the world – and has arguably contributed to an enhanced rivalry with the US, expanded to the space realm. The present article will provide a brief overview of the development of the Chinese Space Station (CSS), outline China’s plans for the future, and comment on its geopolitical implications.

While China’s current space station is very recent, China’s pursuit of crewed spaceflight and human presence in space actually goes back to the 1960s. Highly impressed by the achievements of the Soviet Union, China began an ambitious crewed space program, kicking off experiments sending various animals (mice, dogs) on rudimentary sounding rockets, and developing instruments to train human astronauts. In 1971, the first batch of taikonauts was selected among air force pilots. The culmination of this initiative was the development of a crewed capsule, the Shuguang-1, kicked off in April 1971.Unfortunately for China, the political turmoil of the Cultural Revolution in the late 1960s and early 1970s, put an end to the project by 1972. This was exacerbated by Mao’s declining interest in crewed spaceflight, despite initially signing off all early crewed spaceflight initiatives: he indeed famously declared in 1972 that “terrestrial needs must come first” (« 先把地球上的事搞好，地球外的事往后放放 » in Chinese), effectively putting an end to the funding of the Shuguang program.

The premises of China’s current space station and crewed program were kicked off in 1992, with the so-called “Project 921”. By the 1990s, China’s space industry had begun to grow at a significant speed for the country, and key technologies were successfully developed – e.g. heavier rockets enabling the launch of crewed spacecraft. Project 921 enabled the achievement of further milestones, including the launch of the first Taikonaut in space in 2003, and the development of an indigenous pressurized spacesuit, subsequently used during the first Chinese Extra Vehicular Activity (EVA) realized by one of the Shenzhou 7 crew member in 2008.

Interestingly, the end goal of the crewed program Project 921 has always been a permanent space station in orbit. The project, outlined over a very long period of time due to China’s consciousness of its need to catch up technologically, was split into 3 phases. The objective of the first phase was to design a crewed spacecraft, able to shuttle humans between the Earth and LEO. This spacecraft was called Shenzhou. The second phase planned for the validation of key technologies through sending a temporary space station to space. This was accomplished with the Tiangong-1 and Tiangong-2 experimental space stations. The goal of the final step is the actual permanent space station.

As a relatively latecomer to crewed spaceflight (at least compared to the US and Russia), China generally took the approach of selecting proven designs for their systems, often similar to Russian designs, so as to minimize risk and reduce additional development time. This explains the resemblance between several Chinese systems (Shenzhou capsule, Feitian space suit, …) and their Russian counterparts. Nevertheless, China has also frequently modified, adapted or improved them incrementally.

This brief historical overview brings us to China’s actual space station. Commonly called the “Chinese Space Station” (中国空间站), one may also use the name “Tiangong Space Station” (天宫空间站) (“Heavenly Palace” in English). It is important to note that the current Tianhe-1 module is an “experimental core module” (试验核心舱): it will only become the official space station once the critical technology (the life support systems, robotic arm and power systems) has been verified and validated.

Once completed, the Chinese space station will be composed of 3 modules. The Core Module/ Tianhe-1 (“Heavenly Peace”) is the central module to which all other modules and spacecraft will connect to. It represents the command center, and the living quarters of the taikonauts. Mengtian and Wentian, which are experimental modules, will subsequently  extend the pressurized and non pressurized experimental capabilities of the space station, while providing additional means of communication, propulsion, power generation, EVA, and even additional living quarters for the taikonauts. In total, the Chinese Space Station will weigh over 60 tons. The living volume of the Tianhe module, 50 m3, will be extended to 110 m3 once the Mengtian and Wentian dock – enabling up to 6 taikonauts to stay on the station simultaneously. A last component of the CSS is the Xuntian space telescope, planned to be launched only in 2024. The Chinese space station is planned to be assembled over 2 years and 11 launches.

China has also been laying the groundwork for a massive 1-km long space station. In August 2021, China’s Natural Science Foundation (国家自然科学基金委员会) published a document named “Guidelines for the 14th Five-Year Plan first batch of projects”, among which figured a “Study of the dynamics and the control of a super large space structure assembly” (超大型航天结构空间组装动力学与控制”重大项目指南). The purpose of such a space station would be to enable long-term stays in space, space resources utilization, extending the current space station, and advancing space exploration and space sciences. If such a station ever does materialize, it will likely require dozens of launches using a superheavy rocket like the Long March 9. It’s important to note here that the projects announced in August 2021 by the CNSF are at a research level, rather than an actual engineering project on China’s space roadmap.

ISS vs CSS: US-China competition extended to the space realm

Having a permanent presence in space has become a strategic issue in the framework of the US-China competition. As the ISS is deemed to retire in the coming years (perhaps as soon as 2024), China’s Tiangong may become the only operational space station in orbit. The US is hence actively seeking to replace the ISS with commercial space stations after 2030, as suggested by NASA administrator Bill Nelson at the 36th Space Symposium in Colorado Spring. Admittedly, the ISS is not the US’ space station. Yet, given that NASA is one of the major contributors, and that it has the power to prohibit cooperation between the ISS and China through the Wolf Amendment, the International Space Station can definitely be considered as an instrument of projection of power for the US.

Stakes are not only about presence in space, but also about international cooperation. As the ISS  will soon be decommissioned, China is seeking to attract international partners in the CSS. At a press conference in June 2021, the China Manned Space Engineering Office indeed announced that 9 projects from 17 countries had already been selected for future collaboration. China may even seek to team up with Russia, after the latter threatened to leave the ISS program by 2025 if the US did not lift sanctions against the country.

Overall, China has very ambitious plans for its space station, and geopolitical tensions are likely to keep increasing in the future. That being said, it is in everyone’s interest that such tensions do not bear any tangible consequences in outer space.